The first phase of the application will be screening the potential applicants. The second part will be an interview.

The Executive Committee will screen the list of interested participants based on the application form, curriculum vitae, and letter of intent. Representatives from different Nordic countries will also be consulted.

Both unsuccessful and successful participants will be contacted at the same time.

Successful participants will be informed at the end of the year. The programme will be implemented virtually earlier next year.

FiNAN does not discriminate applicants based on sex, age, gender, social status or religion. The decision made by the executive committee is irreversible. 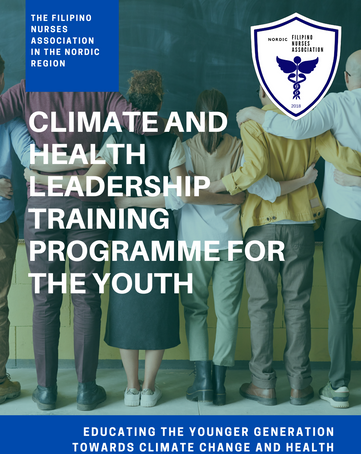 Speakers will be highly competent experts from different parts of the world including Europe and the United States of America who are in the field of health and sustainability.

There is no fee for the training. Participants will receive certificates upon completion of the programme.

The Filipino Nurses Association in the Nordic Region wishes to announce the "Climate and Health Leadership Training Programme" as the organisation's initiative to educate the younger generation on the effects of climate change to our health. The target group will be 25 participants from different countries around the world. Of the 25 participants, 20 will be coming from the low-and-middle-income countries and 5 will be from the Nordic countries.